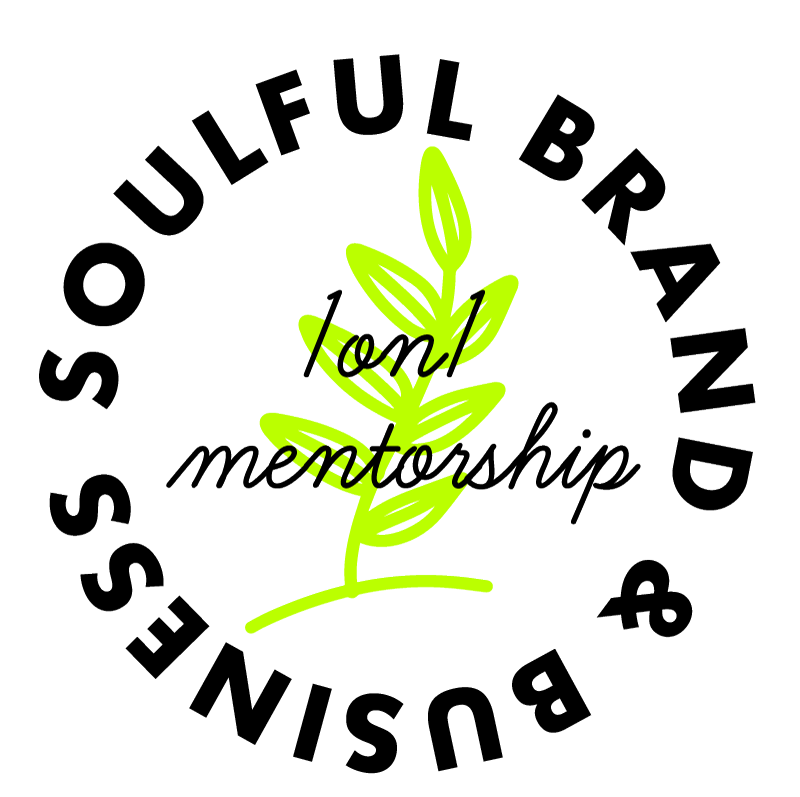 I’ve been thinking about brands and business since I was in the womb. (for real, you should meet my mom!)

When I was a little kid and I lived in Ecuador, my parents had a very successful business. Their business was doing really well. Fast forward to 1999, Ecuador went through a major financial crisis. My family lost everything. We moved to the United States with $500 to our name, and we had to start over. At that point, I watched my parents build a whole new business from the ground up.

In 2017, when it was time for me to start my own biz, I thought I was well equipped. lol, I had no idea how hard it would be.

I struggled for many years. I signed up for different programs.  I thought if I learned the right formula from the right person, I’d be good to go. The more coaches I worked with.. the more lost I felt. (not to mention more in debt…)

In 2020 something shifted. I realized that I’d been looking for answers in the wrong places.
I realized that if wanted to create a business that felt good to me, I needed to look inward to find the the next steps.

Your business is an incredible tool to create the world you want to live in.

Through our calls, we will journey through:

Mindset, to uncover any dusty beliefs that might be keeping you stuck in old patterns.

Embodiment, where you’ll take supported action to help you step into the future version of yourself.

Brand Strategy:  you’ll create a brand that takes ownership of your BRILLIANCE so that going back to old you is no longer an option.

50 MIN SESH EVERY OTHER WEEK

In our 8 private coaching sessions, we will explore deeply where you are and where you want to be. Together, we’ll design a plan that will make your desired change inevitable. You will leave each call with a clear and simple document that outlines the steps you need to take between sessions.

In between calls, you will have private access to me via voice notes. I’ll be there every step of the way as you implement the strategies we outline. I’ll also be there to go down the rabbit-hole with you, if something comes up in-between sessions.

A PROGRAM TAILORED TO YOUR NEEDS

In this program, we’ll start by setting goals! I’ll tailor the sessions to you and your needs. We’re not winging it though! We’ll be leaning on proven frameworks and designing a clear path for your success.

If you’ve tried to change before and have gotten stuck in the past, you’re in the right place. In this program, I’ll walk you through the Immunity To Change framework (developed by smarty pants from Harvard!) where you’ll learn exactly HOW you get in your own way, and how to stop.

My Brilliant Brand Strategy™️ Framework is designed to be simple to be simple yet powerful.  This proven method will teach you how to build a brand rooted in who you are and what kind of work you want to be doing.

but Pamela, what if…

If all we’re doing is talking, how do I know this is going to work for me?

I’ve been in situations where the coach and I just talked about whatever came up. In the end, I felt a little better, but not any closer to my goal. My program is designed for action and each conversation is purposeful. I take you step-by-step through proven brand strategy and mindset frameworks to help you reach your goal. Yes, you’ll feel better. But you’ll also take action.

I’ve already gone to the workshops, I’ve gone to the conferences, and bought a “YOU GOT THIS” mug. And nothing changed. How is this different?

As a proud self-improvement junkie, I get it. I went to ALL the things and just ended up feeling more lonely and with an even bigger mostly pointless to-do list. That’s the magic in this 4-month program. It’s tailored to you. No generic advice. This is a highly supported, customized way for you to take big scary action. (and I’ll be there every step of the way, promise!)

I feel so lost. Is this really the best time to invest in myself if I don’t even know exactly what I want?

I’ve been exactly where you are. When I started this journey, I had just burnt out of my “dream” job. I was also lost. In the middle of that messy feeling, I thought I had nothing. Over time, I learned that I actually had everything I needed inside me. In our 4 months together, you will learn to use all the tools that took me from LOST to crystal clear on who I was, how I talked about it, and how I created a life I love.

What if I get stuck while we’re working together?

Honestly, you probably will get stuck! I’m ready for that. With four months together, we’ll have the time and space to dig up the things that have made you feel stuck in the past. We’ll take them apart one by one until they’re no longer relevant. This program is highly individualized. The support you’ll receive is guided by your needs, your stumbling blocks, your perceived obstacles.

let’s take your business from meh to yay!

your business can be a vehicle for personal + collective transformation

In 2017 I nervously quit my fancy pants salaried tech job to launch my first community-driven project. Five years and dozens of clients later, I help others do the same. All while avoiding hustle culture and harmful marketing tactics.

In 2017 I nervously quit my fancy pants salaried tech job to launch my first community-driven project. Five years later, after several website redesigns, guided meditations, and dozens of clients later, I help others do the same!

I believe marginalized folks will lead the way to a liberated future and am committed to helping folks transform their communities by demystifying innovation and guiding them to trust their inner voice.

As a previously undocumented immigrant, I became an advocate for economic + immigrant justice after my family lost everything and migrated to the US.

My advice has been featured on Forbes and on stages nationwide.

“Pamela helped me structure my core message to meet my ideal client through various levels of my work. She created ways to talk about my offerings that I hadn’t considered and was able to clarify some of the areas where I was confusing my audience. What I like most about working with Pamela is that her attunement to emotion allows her to easily tap into the client experience in a way that I couldn’t, even as a trained psychologist!”  – Isha Vela

“Pamela’s services were a total game-changer for me. For the first time in my life, I saw myself as a would-be entrepreneur. I had never, ever imagined myself in that role before, and wouldn’t even have known where to start. Through seeing Pamela’s accessible, encouraging advice, I started to realize I could start a business. Her guidance in both 1-1 and group settings was invaluable to me for the year that I worked with her and is still deeply valuable today. I would highly recommend her for help with your small business and branding strategy.” – Claire Blosssom

“Prior to working with Pamela, I was looking for confidence and clarity in marketing my services. I’d struggled to feel like my business was aligned with my authentic values and priorities. After working with Pamela, I knew exactly who I wanted to serve through my work, and how I wanted to serve them. We also worked through the limiting beliefs holding me back from promoting my work. On the other side of working with Pamela, my business is filled with ease and purpose. Promoting my offerings is not nearly as tough as it used to be, and I’m experiencing so much joy in my daily activities now. I would highly recommend that you work with Pamela, especially if you’re struggling to feel aligned and confident in how you and your business show up in the world. It’s worth every penny and minute of your time. Go for it and watch the magic unfold.”
– Bethaney Wilkinson